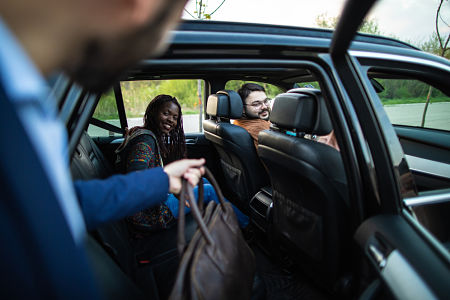 Sen. Blumenthal said the responses were “ambiguous” and called on the companies to institute fingerprint background checks for drivers.

Blumenthal said the two companies should also exchange data about driver dismissals with each other, which would help keep the entire system safer.

The Post investigation found that safety investigators are instructed to keep the company’s interests foremost, including through restrictions on their ability to report apparent felonies to police and a ban on sharing information with competitor Lyft about possibly dangerous drivers. That means that drivers who are restricted from Uber or Lyft for violations like poor driving or even assaults on passengers can, with impunity, simply register as a driver for the other company.

Blumenthal said he plans to hold a private meeting with Uber and Lyft and believes Congress should hold hearings on ride-hailing safety.

Representatives from neither Uber nor Lyft appeared at a recent House Transportation subcommittee hearing aimed at examining safety and labor practices.

Uber and Lyft have both faced multiple lawsuits over their background checking policy and responses to assaults and sexual misconduct during rides. Earlier this year, 14 women sued Lyft alleging it didn’t adequately respond to their allegations of sexual assaults during rides.

The companies have added new features like panic buttons in the app and additional background checks for existing drivers. Lyft recently updated its protocols for driver bans, The Post reported, issuing new guidelines that could result in bringing some previously banned drivers back onto the platform.

“Uber is deeply committed to the safety of riders and drivers, and our actions show it,” Uber spokeswoman Susan Hendrick said in a statement. “We look forward to meeting with the Senator soon.”

Lyft spokesman Adrian Durbin said Lyft “has worked hard to design innovative policies and features focused on the safety of both passengers and drivers” and that the company has hundreds of staff working on safety initiatives.

In their responses to Blumenthal, both Uber and Lyft said fingerprinting may bias against minorities who are more likely to be arrested but not necessarily convicted. That is why, they said, they rely on their own background check systems and those provided by a tech company called Checkr.

“That’s the reason for belt and suspenders — for using both Checkr and fingerprint,” said Blumenthal. “The only reason they can possibly give for not using fingerprinting is an additional cost — it should be the cost of engaging in their business."

“While no background check is perfect, our process is thorough, fair and relevant to the work in question,” Justin Kintz, Uber vice president of global public policy, wrote in his letter to Blumenthal.

Lyft’s director of federal public policy, Lauren Belive, said in her letter to Blumenthal that the company is “constantly developing new ways to enhance ride safety.”

Blumenthal said he supports Uber’s policy that survivors of sexual assault should be allowed to decide if they want to go public with their stories, but he noted that law enforcement can keep victims anonymous. Uber and Lyft “have an independent responsibility to at least alert law enforcement even if the wish of the survivor is respected — and it should be — that they want to avoid being part of some public proceeding,” he said. “Lyft or Uber drivers are in positions of trust. Once somebody gets into their car, the rider is vulnerable.”

Uber and Lyft both said they have 24-hour support for riders and suspend or ban drivers when their investigations warrant.